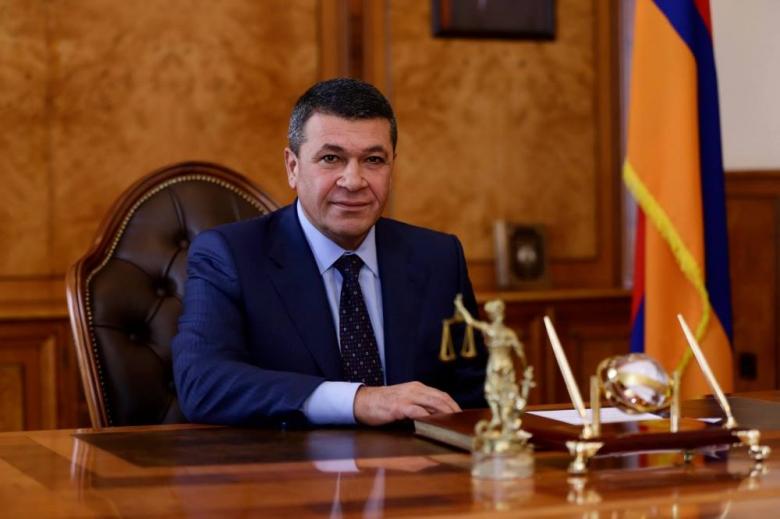 Dear compatriots!
I am addressing to you as the Police Chief and as a citizen.
I do not want to talk about the legal side of the latest events, as it was touched upon in numerous statements of the RA Police, and I also do not intend to give assessments to the parties and their actions, since the Police is a supra-political structure that is beyond political developments.
Moreover, we clearly realize that this is not about the "truthfulness" of a party, but about Truth, which is an absolute value and unshakable, as is the inalienable role of the police in the life of our society.
Remember that any revolution becomes meaningless when an attempt is made to destroy what has been constructed, while we have spared no effort to build the Army and the Police.
The State is what has been built by joint efforts. The Police are the guarantor of stability, tranquility, peace in the State. The policemen belong to the state, not to the authorities or the opposition. Attempts to lure the police on this or that side increase the crack to the abyss, in which we may find ourselves.
Remember that a State is built for decades and at the cost of thousands of lives, but it can collapse in a matter of hours.
It is unacceptable!
Do not try to dispart the policeman and the law enforcement officer inside a police officer, who are in constant dialogue for the solution of short-term problems. This is extremely dangerous for the state, the protection of which is entrusted to the police.
Being a military man, I urge you to refrain from the division of the army. A bisected army can't be the guardian of a single state.
It is not true that the end justifies the means. Encouraging the defender and guardian of the state to betray their oath, rank, comrades can not be justified by any goals. Just as the service to certain ideas can not replace the sacred service to the people. We serve the people serving to the Law. I also call on you to serve the Law, so that the Law will also serve you.
This is the truth.
As it is true that due to common mistakes we have reached a point where we can completely lose control over the situation.
This can not be tolerated.
Therefore, I appeal to all.
Come to your senses, guys!
Organize yourself, pattern your behavior, bring clarity! Remember once and for all that nothing is worth losing our statehood.
Remember also that without the Police there is no state that the policeman is a warrior of the state, a soldier of the world, a soldier of the good, not violence and a rubber truncheon. But be also sure that peace and kindness are signs of real strength, not weakness.
I turn to my fellow policemen.
Guys, I said that I love and respect you, that I am ready to fight with you and live. As always, I am sure that by serving the law we will continue to serve the people.
I again appeal to all my compatriots.
People, I am convinced that the completion of all this by peace and kindness will be our common victory, otherwise, we will lose everything.
I believe in our great love and undeniable wisdom.
May God protect us.

VLADIMIR GASPARYAN
Head of Police of the Republic of Armenia,
Police colonel-general