The 44th INTERPOL European Regional Conference was held in Prague, Czech Republic on May 18-20, 2016. The event brought together 168 high-ranking delegates from 56 countries of the European region, representatives of 20 international organizations.
The conference was presided over by Mr. Alexander Prokopchuk, INTERPOL Executive Committee Delegate for Europe, Head of INTERPOL’s National Central Bureau in Moscow, and Interpol Secretary General Jurgen Stock, who made the opening speech.
Speeches were delivered by high-ranking officials of the Czech Republic, including Deputy Minister for the Interior Jiří Nováček, Head of the National Anti-drug Directorate of the Czech Police, representatives of the INTERPOL General Secretariat and a number of other member states.
The Conference was devoted to those spheres of criminal activity which represent the most serious threat to the region, in particular, border Security and Immigration control, terrorism, illegal migration and its consequences, cybercrime, fight against illicit trafficking in drugs, firearms and ammunition.
Secretary-General Mr. Stock, in his speech, said that Europe’s border security greatly depends on the close cooperation of police and law enforcement agencies within Europe and in countries outside its borders.
Pointing out the recent period of rapid growth in the number of terrorist attacks in Europe, Mr. Stock noted that the constantly increasing number of illegal immigrants entering this region is a serious threat, and stressed the role of organized criminal groups involved in this field.

The Agenda issue reports were followed by active discussions, as a result, 4 proposals were adopted.
The Armenian delegation was represented by Head of the INTERPOL NCB in Armenia, Police Lieutenant Colonel Ara Fidanyan.
During the days of the conference Mr. Fidanyan met with Interpol Secretary General Jurgen Stock and other high-ranking representatives of the INTERPOL's General Secretariat, as well as with his counterparts from Ukraine, German, Poland and other countries discussed issues of mutual interest with them. 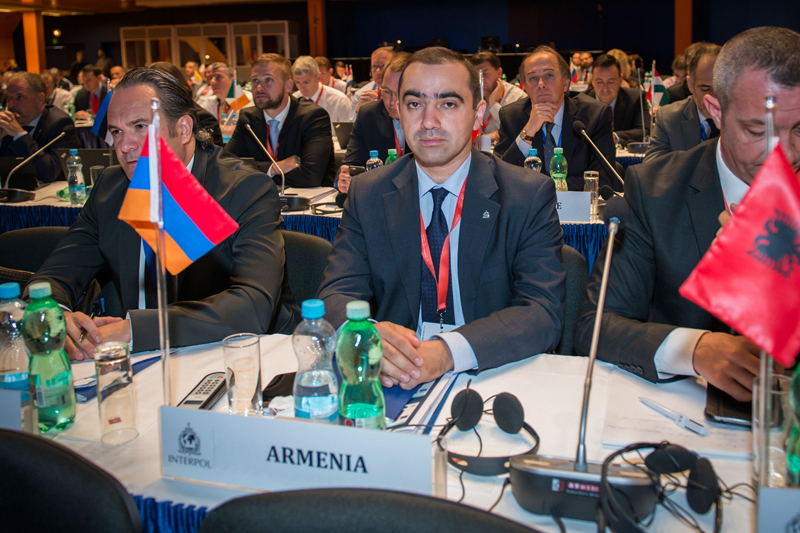