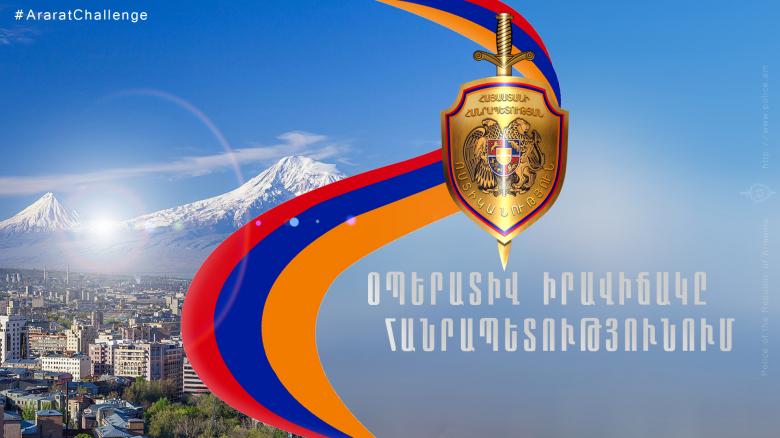 According to the operations reports of Police of the Republic of Armenia, 75 cases of crime were detected by officers of various police subdivisions in the territory of the republic from July 30 to July 31, 6 of which were earlier committed crimes.
In particular, 13 cases of causing bodily harm, 12 cases of theft of personal property, 8 cases of fraud, 5 cases of attempted theft of personal property and official forgery or official negligence, 4 cases of detecting drugs, 3 cases of abuse of power, 2 cases of squandering or embezzlement and battery, 1 case of attempted murder, kidnapping, robbery, theft of state and public property, tax evasion, seizure of weapons and ammunition, cybercrime, bribery, violence against a representative of authorities, arbitrary seizure of lands which are state and municipal property, as well as the failure to take measures to prevent arbitrary construction of buildings and structures, forgery of documents, illegal acquisition, sale, storage, transportation or carrying of weapons and ammunition, threats of murder, organizing or holding an assembly in violation of the law, illegal separation of a child from his/her parent.
2 missing persons have been located, 5 wanted persons have been detected, 3 others turned themselves in to the Police.
11 cases of voluntary surrender of arms and ammunition have been registered.
From earlier committed crimes 2 cases of theft of personal property have been solved.
Over the past 1 day, 12 accidents have been registered in the Republic: 2 persons died, 20 people received bodily injuries of different levels of gravity.