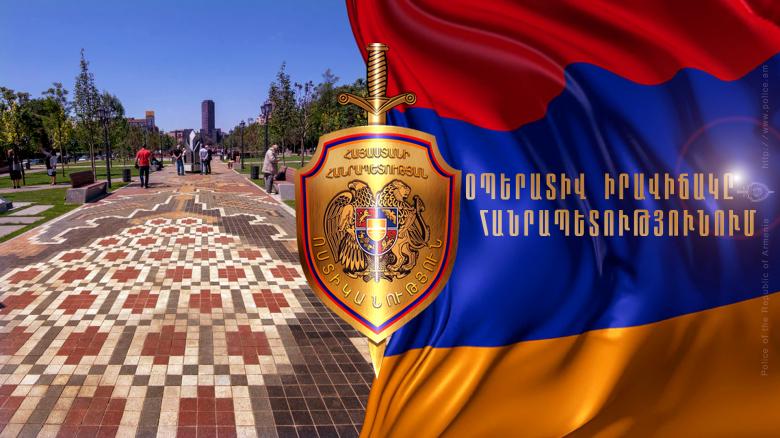 According to the operations reports of Police of the Republic of Armenia, 157 cases of crime were detected by officers of various police subdivisions in the territory of the republic from August 7 to August 10, 7 of which were earlier committed crimes.
In particular, 27 cases of causing bodily harm, 25 cases of illegal cultivation of forbidden plants containing narcotic drugs, 15 cases of theft of personal property, 13 cases of detecting drugs, 12 cases of fraud, 9 cases of domestic violence, 5 cases of illegal felling of trees, 4 cases of robbery, squandering or embezzlement, threats of murder, battery and hooliganism, 3 cases of violence against a representative of authorities and abuse of office, 2 cases of kidnapping, car theft, deliberate damage to property and forgery of documents, 1 case of burglary, extortion, counterfeiting, poaching, official forgery or official negligence, violation of labor protection rules, resulting in the death of a person, violation of the rules for the protection and use of subsoil, detecting cold weapons, obstruction of the legitimate professional activities of a journalist and attempts to commit violent acts of a sexual nature with a minor.
1 missing person has been located, 4 wanted persons have been detected, 4 others turned themselves in to the Police.
4 cases of voluntary surrender of arms and ammunition have been registered.
From earlier committed crimes 2 cases of causing bodily injuries and burglary, 1 case of theft of personal property, fraud and hooliganism have been solved.
Over the past 3 days, 43 accidents have been registered in the Republic: 8 persons died, 74 people received bodily injuries of different levels of gravity.