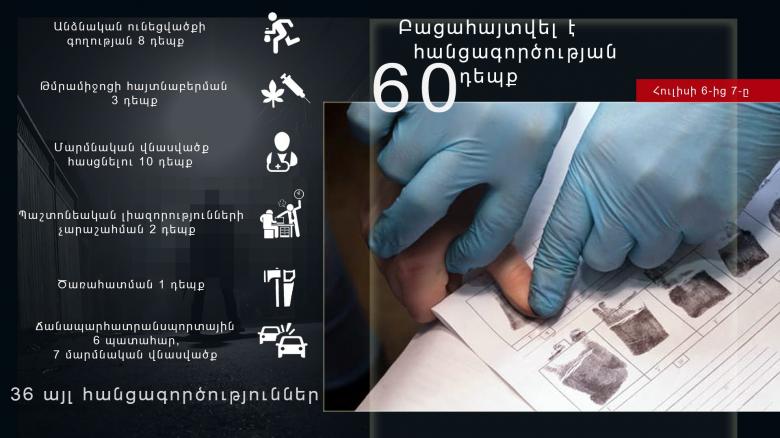 According to the operations reports of Police of the Republic of Armenia, 60 cases of crime were detected by officers of various police subdivisions in the territory of the republic from July 6 to July 7, 4 of which were earlier committed crimes.
In particular, 11 cases of fraud, 10 cases of causing bodily injuries, 8 cases of theft of personal property, 4 cases of battery, 3 cases of detecting drugs, 2 cases of hooliganism, bribery, abuse of office and threat of murder, 1 case of kidnapping, theft of state or public property, misappropriation or embezzlement, tax evasion, illegal tree felling, violation of rules for release of psychotropic substances, drug smuggling, organization and holding of a meeting in violation of the law, coercion to sexual intercourse or other acts of sexual nature, human trafficking or their exploitation, committing actions of sexual nature, acquisition of property knowingly obtained by crime.
3 wanted persons have been detected, 2 others turned themselves in to the Police.
From earlier committed crimes2 cases of theft of personal property, 1 case of burglary and counterfeiting have been solved.
Over the past 1 day, 6 accidents have been registered in the Republic: 7 people received bodily injuries of different levels of gravity.