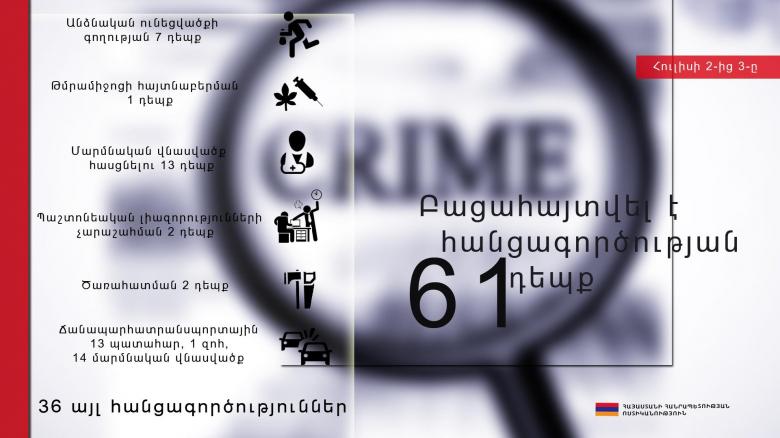 According to the operations reports of Police of the Republic of Armenia, 61 cases of crime were detected by officers of various police subdivisions in the territory of the republic from July 2 to July 3, 5 of which were earlier committed crimes.
In particular, 13 cases of bodily harm, 7 cases of theft of personal property and fraud, 6 cases of domestic violence, 4 cases of illegal cultivation of forbidden plants containing drugs, 3 cases of violation of the rules for the delivery of narcotic drugs, 2 cases of seizure of ammunition weapons, illegal tree felling, abuse of office, 1 case of official forgery or official negligence, detecting drugs, bribery, manufacture or production or sale of counterfeit drugs, driving a vehicle by a person, not having the right to drive a vehicle, while intoxicated, forgery of documents, battery, death threats and animal cruelty.
1 missing person has been located, 3 wanted persons have been detected, 2 others turned themselves in to the Police.
6 cases of voluntary surrender of arms and ammunition have been registered.
From earlier committed crimes 5 cases of theft of personal property have been solved.
Over the past 1 day, 13 accidents have been registered in the Republic: 1 person died, 14 people received bodily injuries of different levels of gravity.