Crime news report for the period from 12 to 15 November 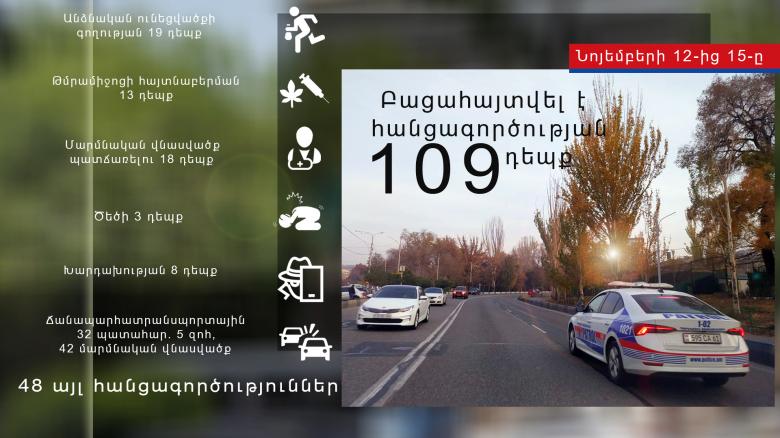 According to the operations reports of Police of the Republic of Armenia, 109 cases of crime have been detected by officers of various police subdivisions in the territory of the republic from 12 to 15 November, 8 of which were earlier committed crimes.
In particular, 19 cases of personal theft, 18 cases of causing bodily harm, 13 cases of drug detection, 8 cases of fraud and domestic violence, 5 cases of squandering or embezzlement and threats of murder, 4 cases of seizure of weapons and ammunition, 3 cases of battery, 2 cases of illegal or false entrepreneurial activity, illegal felling of trees and grave insult, 1 case of kidnapping, burglary, tax evasion, poaching, bribery, official forgery or official negligence, sexual violence, intentional failure to fulfil decision on urgent interference or decision on defence, committing lecherous actions against a person under the age of 16, Failure to perform or improper performance of professional duties by medical and support personnel, that has negligently caused the death of the patient, arbitrariness and voting more than once or instead of another person.
12 wanted persons have been detained, 8 others turned themselves in to the Police.
3 cases of voluntary surrender of arms and ammunition have been registered.
From earlier committed crimes, 3 cases of personal theft, 2 cases of running-down accident, theft of state or public property, burglary and causing bodily injuries have been detected.
Over the past 3 days, 32 accidents have been registered in the Republic: 5 persons died, 42 people received bodily injuries of different levels of gravity.