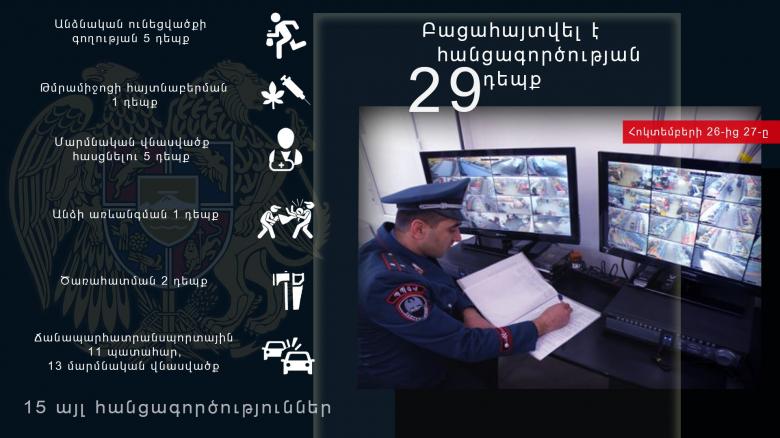 According to the operations reports of Police of the Republic of Armenia, 29 cases of crime have been detected by officers of various police subdivisions in the territory of the republic from October 26 to October 27, 1 of which was an earlier committed crime.
In particular, 7 cases of fraud, 5 cases of causing bodily harm and theft of personal property, 2 cases of seizure of weapons and ammunition and illegal felling of trees, 1 case of attempted murder, kidnapping, detection of narcotic drugs, domestic violence, illegal separation of a child from a parent, unauthorized occupation of land plots that are state or public property, as well as failure to take measures established by law to suspend or prevent unauthorized construction of buildings or other structures and violation of the rules for the delivery of narcotic drugs.
1 missing person has been located, 4 wanted persons have been detained, another one turned himself in to the Police.
From earlier committed crimes 1 case of causing bodily harm has been solved.
Over the past 1 day, 11 accidents have been registered in the Republic: 13 people received bodily injuries of different levels of gravity.