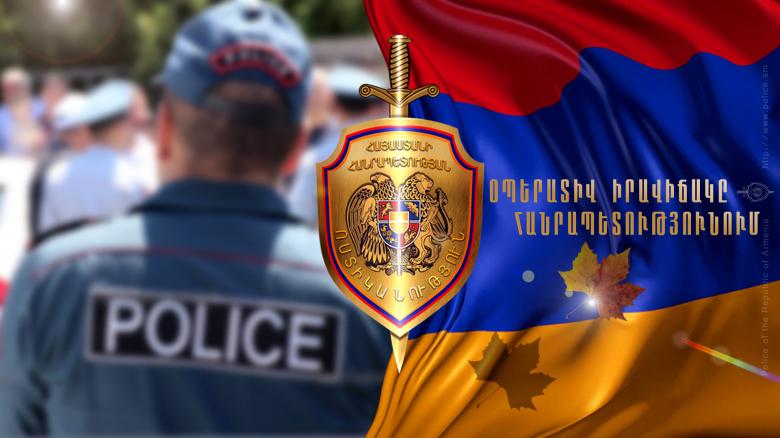 According to the operations reports of Police of the Republic of Armenia, 79 cases of crime were detected by officers of various police subdivisions in the territory of the republic from June 25 June 26, 8 of which were earlier committed crimes.
In particular, 14 cases of theft of personal property and causing bodily harm, 7 cases of fraud and death threats, 6 cases of detecting drugs, 5 cases of abuse of power, 4 cases of theft of public or state property, 2 cases of battery and illegal crossing of the State border, 1 case of robbery, burglary, deliberate destruction of property, seizure of weapons and ammunition, illegal felling of trees, cultivation of prohibited plants containing narcotic drugs, battery and intentional failure to comply with a decision on emergency intervention, sexual intercourse with a person under the age of sixteen years or committing sexual acts against a person under 16 years of age, failure to implement or improper implementation of professional duties by medical and support personnel, and bribery.
2 wanted persons have been detected, another one turned himself in to the Police.
4 cases of voluntary surrender of arms and ammunition have been registered.
From earlier committed crimes 5 cases of theft of personal property, 1 case of burglary, road traffic accident and causing bodily harm have been solved.
Over the past 1 day, 9 accidents have been registered in the Republic: 11 people received bodily injuries of different levels of gravity.