The 83rd session of the General Assembly of the International Criminal Police Organization – INTERPOL, took place in Monaco from 3-7 November, 2014.
The five-day conference, held under the theme "Turn Back Crime: 100 years of international police cooperation" brought together more than 1,000 delegates from 166 member countries and began with a Ministerial meeting, which  gathered Justice, Home Affairs and Security Ministers from some 100 countries.
The ministers reviewed the history of global police cooperation and how law enforcement has evolved throughout the past 100 years to collectively combat transnational organized crime. Critical questions for the future of international policing were also addressed, including how countries can best prepare for contemporary crime challenges by expanding partnerships beyond the law enforcement realm.
A joint Ministerial declaration was issued at the conclusion of the meeting, encouraging all member countries to take the necessary steps to strengthen international police cooperation against all forms of transnational crime, with an emphasis on terrorism.
"This Ministerial declaration, combined with the work of the General Assembly, will build upon the strong foundations laid by INTERPOL, and ensure that the next 100 years of international police cooperation are as effective,” said INTERPOL Secretary General Ronald K. Noble.
Opening the conference, HSH Prince Albert II of Monaco said the evolution of crime and criminal organizations since his great-great-grandfather Prince Albert I brought together police and judicial leaders for the first International Criminal Police Congress in 1914 means INTERPOL’s role in coordinating the world’s police has become more important than ever before.
"Today, INTERPOL is the most effective structure for fighting transnational organized crime. Your exchanges and discussions will permit you to assess the measures carried out during the past years, notably for improving the capacity of police to adapt their methods to new types of crimes connected to advances in technology. I am glad to host all of you here to mark the 100th anniversary of this international organziation which is of great importance in the field of global peacekeeping”, - said Prince Albert.
INTERPOL President Mireille Ballestrazzi said that the historical gathering underlines the vision of the global leaders who created INTERPOL out of the first International Criminal Police Congress in bringing the world’s police together as a unified force against the ever-changing criminal threat.
"The terrorist threat has never been stronger, while cybercrime is spreading throughout the virtual world. Our environment, the health of our populations are also threatened by greedy traffickers seeking to profit. Faced with these new threats, law enforcement agencies have mobilized. They have become better organized, better equipped, better trained, more professional. In short, they have adapted, making the best use of technical and scientific advances such as centralized files, exploitation of evidence, communication systems, monitoring devices, protective equipment" , -concluded Ms Ballestrazzi.
President Ballestrazzi also paid tribute to the "outstanding work" of the outgoing Secretary General: “Thanks to Mr Noble, INTERPOL has been transformed through modernization, technological development and innovation, setting a benchmark in the history of the Organization.”
Present at the meeting was Mr. Teo Chee Hean, Deputy Prime Minister of Singapore. In his speech Mr. Teo Chee Hean highlighted the importance of the INTERPOL Global Complex for Innovation opened in Singapore during the 79th session of he Interpol General Assembly. The GCI assists its 190 member countries combat cybercrime, shows them operational and investigative support to help identify and address emerging crime threats, provides a platform for disaster victim identification and incident response.
The Ministerial gathering heard that, despite the progress made, crime and terrorism continue to pose a significant threat to society, underlining the need for continued efforts to build and strengthen police institutions and share policies, practices and procedures to ensure efficient law enforcement cooperation.
“The world has changed and police have adapted to new forms of crime which threaten the security of our society" ,- said Régis Asso, Monaco’s Director of Public Security.
"Today we have the pleasure of reuniting to continue the visionary initiative launched in 1914 and reflect on the results of one hundred years of international police cooperation for a safer world", - added Mr Asso.
The Armenian delegation consisted of Deputy Head of the RA Police, Police Major General Vardan Yeghiazaryan and Head of the Interpol NCB in Armenia, Police Lieutenant Colonel Ara Fidanyan. Our delagates had several bilateral and multilateral meeting both with Justice, Home Affairs and Security Ministers, Police topp brass from other countries and  representatives of the Interpol  General Secretariat, in  particular, Russian Minister of Internal Affairs Mr. Vladimir Kolokoltsev, Georgian Interior Minister Alexander Chikaidze, Interpol Secretary General Ronald Noble, Interpol president Mireille Balestrazzi. A number of issues of mutual interest were discussed during those meeting.
At the conclusion of the session the INTERPOL’s General Assembly unanimously elected Jürgen Stock as the new Secretary General of the world’s largest police organization.
"Dialogue, security and trust among ourselves and with our partners are the key to shaping INTERPOL’s future. Together we can make a difference. Together we can turn back crime. Together we can make the world a safer place" , - said Secretary General Stock.
About 20 decisions affecting various spheres of criminal activity were taken at the conclusion of the 83rd session of INTERPOL General Assembly. 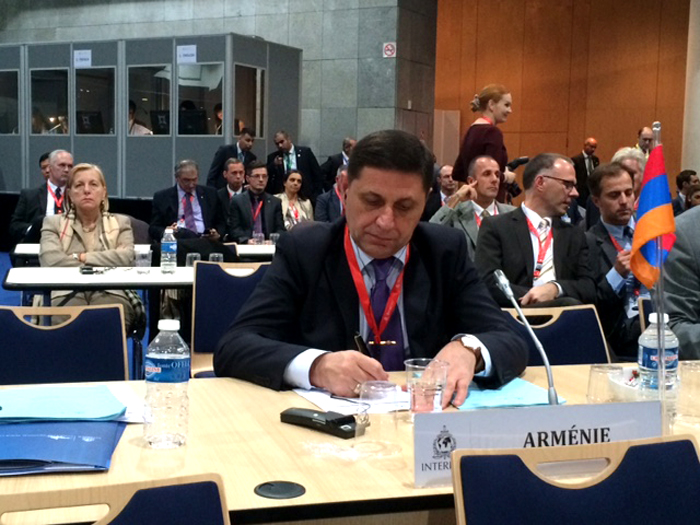 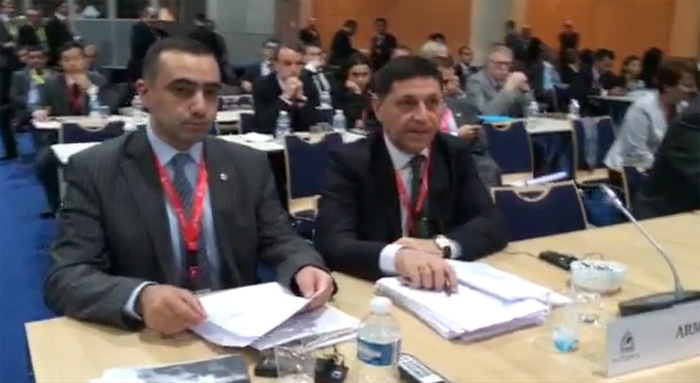